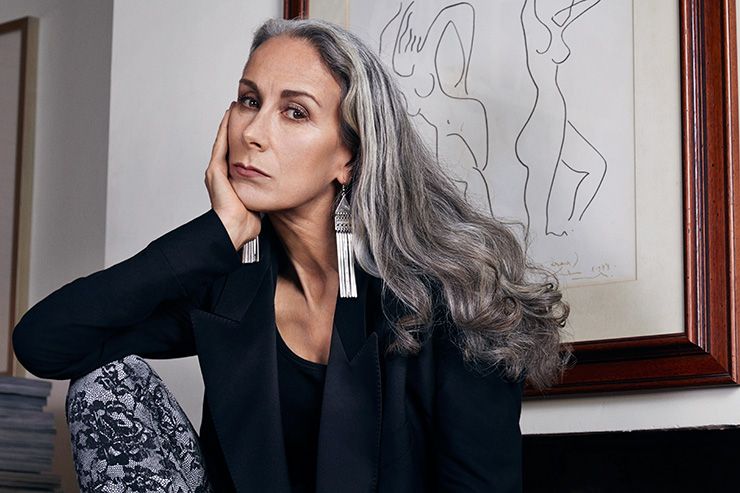 Ageist social practices in popular fashion magazines and the reluctance of the fashion industry to recognise the sartorial needs of female baby boomer cohorts feed into an internalisation of naturally ageing women’s bodies as socially undesirable.

The fashion industry has a complex and clearly documented obsession with youth. As increasingly younger models are being depicted in adult situations in the name of high-fashion, concerns rise as to how deeply ingrained the Lolita effect is entrenched within our modern society. On the other side, with many models being forced into retirement at the tender age of 24, entire generations of people are failing to see aspirational representations of themselves within fashion media contributing to a rise in body image issues, particularly in older women.

The Fashion Spot reports that 50 plus models made up 0.29 percent of all castings for the Fall 2017 shows. A victory – yes but the war against ageism rages on.

​The Psychology of Fashion spoke to Caryn Franklin MBE.; Fashion Activist, co-founder of All Walks Beyond The Catwalk and Professor of Diversity, who’s no-holds barred and psychologically grounded approach to tackling fashion’s age problem is aspirational to say the least.

POF: During London’s Fall 2017 shows, women including writer Jane Felstead and model Brucella Newman led the ‘Grow Up London Fashion Week’ protest. Do you think protesting is an effective tool to combat ageism in the industry?
FRANKLIN: It’s a pivotal way with which we can make our thoughts known – using a platform like London Fashion Week to put out counter cultural thinking. Fashion week has created the normative fashion body which is young thin and Caucasian and anything outside of that is seen to be novelty. What we want is a situation where diversity, women in all their diverse forms are seen as aspirational and are given a role within the portrayal of fashion.

POF: As a Professor of Diversity and a Fashion Psychology MSc. Graduate, what are some of the new and inventive ways that people are utilising to challenge ageism.
FRANKLIN: Research into the effect of a lack of diversity in role models on our self esteem is making a huge difference. Applying an intellectual rigour to this issue to help retailers understand the situation has some efficacy. Dr. Ben Barry who delivered a huge cross cultural study with over 3,000 women, created a marker for retailers to recognise that when women see models who share similar characteristics they show increased intention to purchase by 300%. Now, because we’re in a dynamic that is really about profit, fashion doesn’t operate to prioritise women’s self-esteem. There are a load of rich industrialists who are looking to make money. We have to talk to them in a way that helps them to understand that they will be able to investigate new avenues of profit and certainly representation to an age group that has more money to spend would seem to be pertinent and prudent.

POF: Data from the 2014 Bureau of Labour Statistics’ annual Consumer Expenditure Survey found that women most likely to spend the most on clothing between the ages of 55 and 64. Given this data why do you think the fashion industry is not embracing this market?
FRANKLIN: I think there are a lot of stereotypical thinking around what the industry feels is representative of their brand. If we’re talking about lack of diversity in front of the lens we also must think about lack of diversity behind the lens – who’s in charge? Quite often the people in positions of power have taken on a male perspective. There aren’t enough women in positions of power to change things, so we have an acculturated view of how femininity should be presented which is mostly upheld by white men. When women get into positions of power within the industry they find that they’re have to acquiesce to the template – the stereotypical way of thinking and challenging it is quite hard because the brain likes to rely on heuristics. It’s the way we’ve always done things and there’s a lot of fear in changing things and doing it differently.
Stills from Style Does Not Retire. A Fashion Film Directed by Caryn Franklin in Collaboration with The Age of No Retirement
POF: Last year you developed the fashion film ‘Style does not retire’. What do you hope to achieve with the film? Will you be taking the project any further?
FRANKLIN: The point of the film was to be able to show that fashion is an amazing tool to involve any body at any age and how clothes do help us read someone. We’ve featured all designs from emerging design talent, some very avant garde clothes. You automatically read someone very differently when they’re wearing clothes that speak to modernity, dynamism, attention seeking etc. It creates a whole narrative that adds to the person that’s wearing them. It was about promoting the idea that young designers can investigate older models to showcase their designs and that older models are just as effective, which I think our film proves. As the organization ‘Age of no retirement’ say, age is the one commonality we all share regardless of gender, racial heritage – whatever. We all with luck are going to get old so we should unite in resetting attitudes towards ageing.

POF: In ‘Style does not retire’ you featured the mature male model Anthony. Do you think mature male models experience similar or different struggles within their fashion careers compared to mature female models?
FRANKLIN: Right now, in modelling we are seeing more older women than we are older men. That being said, in our mass media industry if we look at the news, if we look at newspapers, if we look on the television, we see many more representations of masculinity not conforming to youthful depictions of their gender than we do women. We rarely see women who haven’t had some form of appearance surgery. However, what’s great is that we are starting to see the Angela Merkel’s the Christine Lagarde’s our own prime minister. I just this morning heard about the appointment of the new police chief, a woman named Cressida Dick, so there is progress being made but many of us would say, not quickly enough.

Stills from Style Does Not Retire. A Fashion Film Directed by Caryn Franklin in Collaboration with The Age of No Retirement
POF: We recently reported that Naomi Campbell scrapped the age limit for models on the competition show Americas Next Top model. Which brands and/or institutions do you think are successfully representing mature models?
FRANKLIN: Ed Watson at Brown has for a long time worked with representation and images older women because that’s his key market. When at Debenhams, he employed my company to involve older women. We did one campaign which featured older models whose ages were 42, 52 and 69 years old. However, we were unable to continue with the campaign – even though it received a great response because I was sitting at a table full of men, some of whom revealed that they didn’t find these older models attractive. Sometimes these male executives don’t realize that they are engaging in their own sexual preference when they are making decisions about representation in womenswear.  And that will take a shed load of psychology to help them understand that because as human beings we don’t like to let go of things that serve our belief systems, we don’t find challenge easy we like to process from a perspective of familiarity. Familiarity makes us feel safe and comfortable.

POF: This year we saw the first ever fifty plus fashion week, who are some of your favourite 50 plus models?
FRANKLIN: I’ve worked a lot with Valerie Pain so I like her very much, she’s an unusual model in that she can do quite Avant Garde looks. Of course, I like Daphne Self and Yasmin Le Bon. Maxine Smith is a model of colour that I’ve worked with on the Debenhams campaign who has a great look – very versatile, I’d love to see more of her. I’d love to see more of Naomi Campbell, I’d love to see more of Iman – these are women who are revered the world over for their aspirational beauty.

My Experience Interning at Fashion is Psychology

Psychologists reveal the true link between Fashion and Mental Health