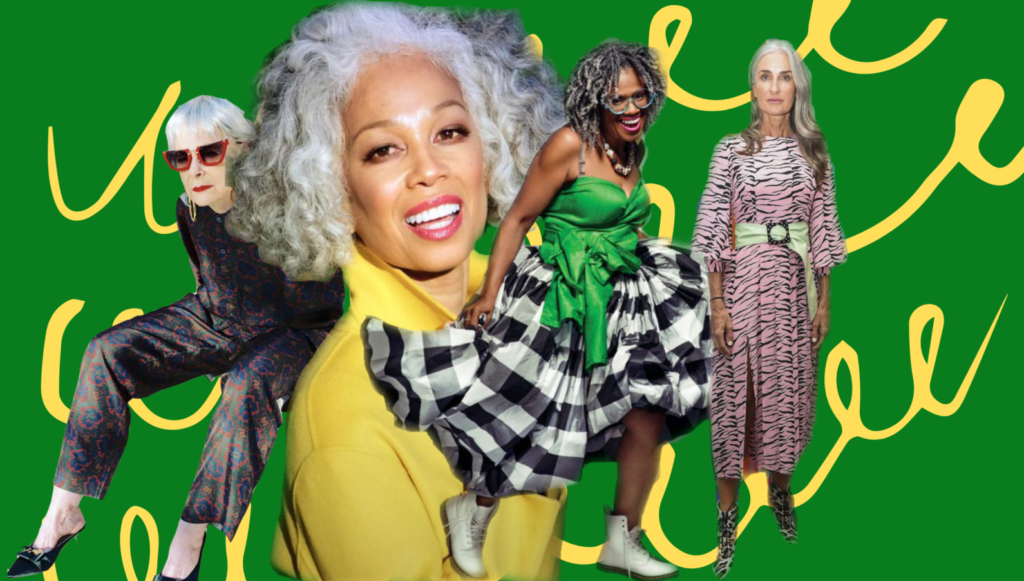 Style is undoubtedly beneficial for individual exploration and group identification. However, it should also be noted that style can have negative implications too if the power of what we wear, and its symbolism, is abused. One noticeable example is the stigma that the media and fashion industry has created surrounding the natural process of ageing. With drab clothing lines purposely designed for the older population and the stocking of shelves with copious ‘anti-ageing’ products, it’s no surprise that ageing has become a fear for so many people today.

.. the danger of the ageing stigma in making people feel a lack of control over their own bodies.”

Implicit rules surround us in society about what we ‘should’ and ‘shouldn’t’ do, including what we should and shouldn’t wear. And whether we are aware of this or not, to some extent, most of us are abiding by these restrictive regulations. Along the high street, multiple clothing lines have been purposely designed for the older population, ‘cut generously with longer and looser shapes, lower bust seams for women and higher rise trousers for men’ (Twigg, 2013). The reduction in clothing options for  older people, indirectly suggests to the public what is and is not ‘acceptable’ to wear at a particular age. These expectations and assumptions can be internalised through the process of enclothed cognition, whereby what one wears can influence cognition through an item of clothing’s symbolic meaning and the experience of actually wearing the clothes. This can be detrimental and degrading to self-concepts by creating feelings of frustration and sadness towards one’s image and capabilities.

However, the presentation of ageing as a negative process is implied to consumers from an early age. Skincare products aimed at young adults are marketed as ‘anti-ageing’, with the use of the preposition ‘anti’ presenting ageing as something to fight against and be seen as the opposition. Therefore, there is arguably a social pressure to remain youthful, which creates a limited perception of what is considered as ‘beauty’. Research has found that women are more likely to consider cosmetic surgery and purchase anti-ageing products when their appearance is important to them (Halliwell & Dittmar, 2003). However, women are also reported to be largely sceptical about the effectiveness of anti-ageing products, yet the mere act of using these moisturisers, cleansers and toners creates a feeling of control over our own health and progression of ageing (Muise & Desmarais, 2010). This highlights the danger of the ageing stigma in making people feel a lack of control over their own bodies.

Furthermore, the fashion industry largely underrepresents or rather ignores, the presence of ‘older’ women in the market. One study found over 50% of readers of top-selling magazines like Cosmo and Vogue are over 35 years old, yet the images they include are of ‘youthful and slender, smooth-skinned and able-bodied individuals’ (Lewis, Medvedev & Seponski, 2010).  This encourages readers to internalise these standards, leading to self-destructive behaviours such as restrictive eating, low self-esteem and mental health issues like depression. The power of fashion in constructing ‘ideals’ is therefore somewhat significant and dangerous if not managed responsibly. On the other hand, this also demonstrates how the fashion industry can use its status to empower women, reducing the stigma that surrounds ageing and the connotations of deterioration it holds.

It is evident that ageism is a pressing issue in today’s society; the narrow beauty standards the media creates and promotion of products aimed specifically at the older population shapes our society’s negative perceptions of ageing. However given the fashion industry’s significant presence across all platforms, it has the potential to reverse the negativity that surrounds ageing and open up the market, so older people feel less isolated and more empowered.

Megan is an undergraduate psychology student from Essex, and loves to combine the study of psychology with her fascination for fashion - in the hope to make a positive influence in the world and to others.

How Has COVID-19 Changed the Beauty Industry?

Why you need to know about Wardrobe Ethnography