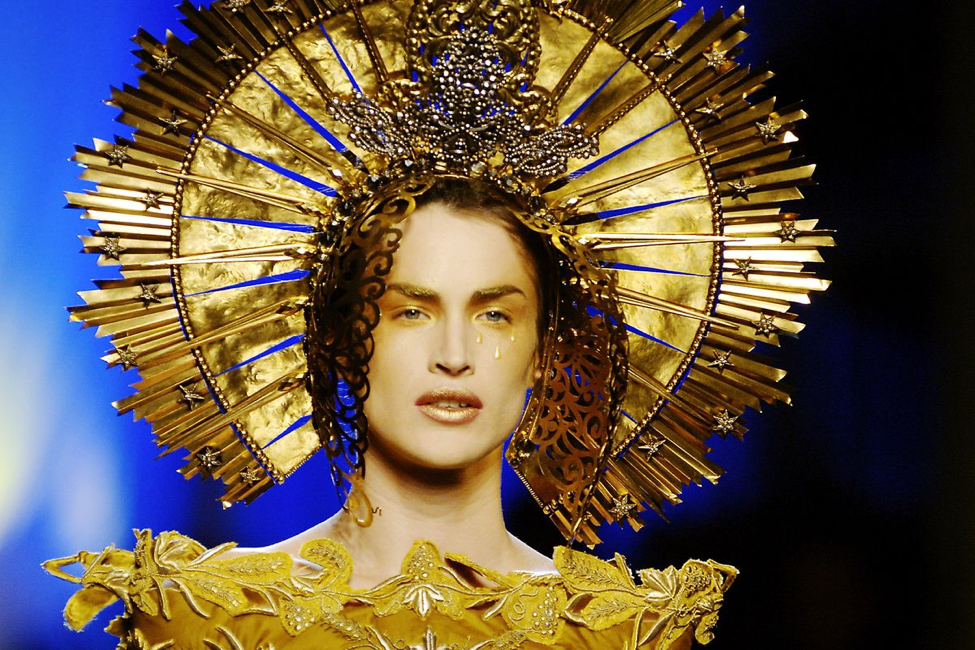 The Psychology of Fashion Blog™ Religion Series: A Catholic Take on Fashion

In this series, The Psychology of Fashion Blog™ will be delving into research surrounding the complex relationship between Fashion and Religion. In the run up to the Met Gala’s 2018 theme ‘Heavenly Bodies: Fashion And The Catholic Imagination’ which has been deemed it’s most controversial theme yet, we’ve spoken to four catholics to get their personal take on Catholicism’s Holy influence on Fashion

Catholicism has such a profound influence on Fashion more than we realize, how have you personally seen this influence, being a Catholic yourself?

Aquil Jackson: I have seen an increase in religion through Fashion. I believe more designers use religious items in their clothing to make more of an accent to their pieces. Whether if it’s prayer hands, or a cross, more and more designers are using it as a way to express a love for a higher power.

Christian Martinez: Catholicism in fashion dates back to the early days of the Catholic Church. As one may see, priests are often dressed with gold colors. I also feel the Catholic Church set the guidelines for appropriate clothing in schools and public places. Even though it may limit what one may wear, I believe religion has a strong effect on religion.

Josaudy Nieves: Personally, I would say that because of Catholicism, a lot of girls are so afraid to show skin, and what I mean is that because a girl is showing her legs or has a crop top, a lot of people call her a slut or that she’s “asking for attention” or she’s not “pure”.

Sileny Vicioso: I didn’t realize how big of an influence Catholicism has in fashion until this year believe it or not. I’ve always seen that Givenchy had patterns that reminded me of designs from church but now there’s a trend of gold chains with the virgin Mary and crosses. People are coming out with clothing lines with printed pictures of Saints and virgins. The most recent person that i saw do this was Cassie Ventura.

How would you describe the relationship between Catholicism and Fashion? And why do you feel this way?

Jackson: I think there is a connection between Catholicism and fashion because just like with a singer using their God given talents to showcase to the world, and let it be known where this blessing comes from, fashion designers want to do the same thing. I feel they want to give praise, and showcase their love for religion through their work. It is a talent/blessing to design and when you see runway shows with a heavenly theme, or clothes with religious references, I feel those are some ways of giving thanks for such blessings.

Martinez: I feel that Catholicism and fashion do not go too well together personally. I feel the Catholic Church is too limiting what one human being is willing to show as “art”. Catholic Church may treat it is as a sexual act as opposed to it being art.

Nieves: There’s no clear relationship between those because it’s always different. Fashion has sexy and seduction but can also have professional and “appropriate”. Being around Catholic people you’re always “expected” to be professional and “appropriate” because the sexy and seductive is always shamed to be unacceptable, if that makes sense. Women aren’t meant to “show” their body, only to the man she’s married to.

Vicioso: I would describe the relationship between Catholicism and fashion as a trend. I think people just wear the clothing pieces because the style is in and not because they are Catholic. I personally think that if you are going to be wearing a sweatshirt with the virgin Mary printed on it you should at least believe in the virgin Mary.

In the book of Exodus, God speaks to Moses about clothing his brother in holy garments, “for glory and for beauty”, what do you think He meant? Do you think God is truly interested in the imagery of our clothing?

Jackson: We are all an extension of God. So, the things we are interested, I believe came from God, and His interests. I believe God enjoys nice garments and the way we dress in those garments, and we praise Him for things we love like nice clothing hence “For glory, and for Beauty” I think it is all connected and that is what makes it great.

Martinez: I personally believe God is not truly interested in the imagery of our clothing. I believe some people can’t afford certain clothing and the Lord does not care what they’re wearing as long as it’s not against Him.

Nieves: I think He meant for the clothes to show power and importance. He said “for glory” which I think mainly means that He wanted for people to see Moses’ brother as a leader or something worth a lot and someone to response.  I do think God is truly interested because I believe He wants us to always be our best self and with that comes great things whether it’s wealth, respect or love.

Vicioso: Just like to go to mass, we wear our nice clothes for example button down shirts, slacks, dresses below the knees. I believe that what He meant is that when we go to mass and pray we should look our best. I wouldn’t wear booty shorts or sweatpants to go and listen to the word of the lord. There are Catholics who do that but I wasn’t raised by Catholics who believe that’s okay.

Has your Catholic religion ever influenced your Fashion sense?

Jackson: I think my religion has influenced my choice of clothing in a sense that I wouldn’t necessarily put on just any type of clothing. Clothes with too many rips, or a superfluous amount of designs in them, I do not really wear. There are some clothes I will not want to wear because I do not want people to perceive me in a way that I am not.

Martinez: Personally, the Catholic Church has not affected my fashion sense. I have a different style, that isn’t very revealing to be quite honest.

Nieves: It has. I don’t wear anything that has my butt out or things that are see through, where you could see

Vicioso: Yes, my religion has influenced my fashion sense. I don’t wear clothing that reveals certain body parts or clothing with anything devilish on it.

Federico Fellini demonstrates his ecclesiastic fashion designs. Some of the scenes were censored by the Vatican, which I’ve found and reinserted into Federico Fellini’s clip “defilé di moda ecclesiastica” from the film “Roma” (1972).

Coco Chanel, Gianni Versace and other iconic designers who grew up Catholic have showcased a number of Catholic inspired collections, do you think the symbolic stillness, seen in early Catholic paintings, has impacted the criticalness yet tranquility in their own work?

Jackson: I absolutely think it influenced these iconic designers. It goes back to what I said earlier, where someone who acknowledges where their talent comes from, will essentially want to shout it to the world because of how happy they are for that talent. Growing up in a church, with beautiful designs all throughout the church, with colors, and pictures and the overall makeup of the church can inspire someone to design something of their own. these icons are no different.

Martinez: I do believe the early Catholic paintings have the profound effect on critical ness and tranquility on fashion. Like when we think of Jesus’s last meal, the first thing we think of is Da Vinci’s “last supper”. Most of the religion’s history is painted and/or written.

Nieves: I think it does relate because as a painting, there’s so many different opinions as to what the painting is ACTUALLY showing, and I guess as a designer and having your models walk the runway with your designs, the same thing is kind of happening. Everyone loves it when they see it, but everyone has their own take on what the message is actually about and that’s what makes things iconic.

Vicioso: They were influenced by the church from the start. Going every week, seeing beautiful Drawings and paintings, and overall colors in the church made them think of ways they can bring their designs to life. These icons made what they saw from a younger age, drive their fashion sense to mirror the things they fell in love with.

Vogue’s 2018 Met Gala will be themed, “Heavenly Bodies: Fashion and the Catholic Imagination” and has been deemed its most controversial theme yet, what religious symbolism do you expect to see?

Jackson: With no question, I expect to see someone on a cross being carried down. That is something that will definitely raise the bar, as well as controversy. There are a bunch of things that will test the boundaries when it comes to what people do with religion, and I expect to see major things at this upcoming event. Wouldn’t be fashion, without a little controversy.

Martinez: In the controversial issue, I expect to see the people to be nude or revealing considering we were all born naked and it wasn’t considered a sin unless it becomes sexual. Everyone was naked at one point. When Adam and Eve ate from the tree, then it became a sin, but in heaven, it won’t matter and I believe everybody could be nude there because we get away from sexual thoughts and sins in heaven.

Vicioso: I think we will see some people on a cross being carried. That would raise the most controversy because that is one of the most iconic things in religion. The symbol of Jesus carrying the cross, I feel will most certainly be a part of the show.

Nieves: I definitely will expect a lot of the “The Cross” and Jesus.

Bethany Morrison is a Alumna of Andrews University and has a BS in Psychology. For as long as she can remember, she's been into creative writing and extensive research. She plans to incorporate her love for law and psychology for her future career.

Everything You Need to Know About Fashion Psychology

How Fashion Professionals are Managing their Mental Health During COVID-19