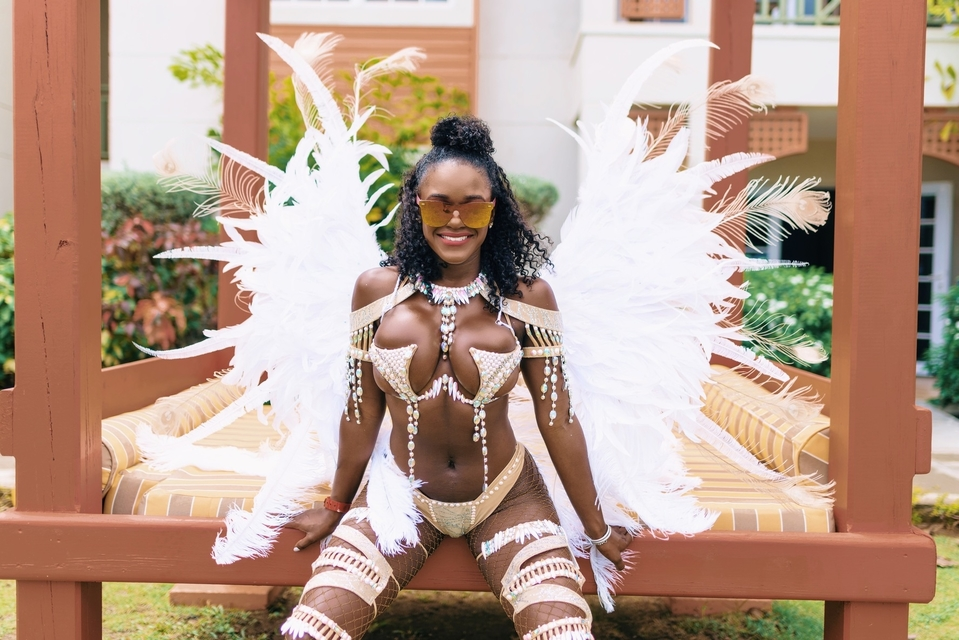 The Carnival outfit, coupled with the freeing backdrop of the Caribbean can evoke an impassion response, particularly in women. In this piece, we’ll discuss the psychological research behind the outfits appeal and how its strong historical roots makes it deeper than simply a cute costume.

This time last week I was awash in a flurry of gems, sequins and feathers and I’ve never felt more powerful. Together, these pieces formed part of my masquerader costume as part of Trinidad Carnival – a yearly celebration that takes place in the days leading up to the Lenten period.  Now, before I paint you a clearer picture of how an outfit (which, on paper sounds like a young bedazzling enthusiasts fantasy) could insight such forceful emotions and even before I describe what the term ‘masquerader’ means, I must first give you a brief insight into the history of Carnival.

Dating back to the 18th century, the history of Carnival in Trinidad is tied up with colonialism and catholicism. While transporting slaves to the Caribbean, Europeans, hailing from France and Spain brought their Pre-Lenten celebrations with them. Carnival originally started as a period for rich White elites to celebrate before the sacrificial period of lent while Black slaves were forbidden from partaking in the festivities. Through a series of emancipations and uprisings, Carnival was reimaged and evolved to what it is today – a cultural jubilee climaxing in the ultimate street party.

Revellers ‘play mas’ or simply, join in on the festivities by becoming ‘masqueraders’: Members of a Carnival group or ‘mas band’. Mas bands create elaborate and whimsical costumes for their masqueraders to wear. In every mas band masqueraders are split into sections. Each section has its own style of costume which come in varying degrees of flamboyance, from delicately placed gems to floor-length tassels and six-foot-tall feathers that would make Big Bird green with envy. Trinidad, where my family hail from, is known as the ‘mother of all Caribbean Carnivals’ so you can understand my innate infatuation with the event.

Now that we’ve got the history out of the way, let’s get back to what you came here for – the fashion. I can spend another couple of paragraphs talking about the series of stellar outfits required for the multitude of parties leading up to Carnival Tuesday but like your white dress on your wedding day, there’s only one outfit that really counts.

“My body was decorated as if it were a prize to be celebrated..” 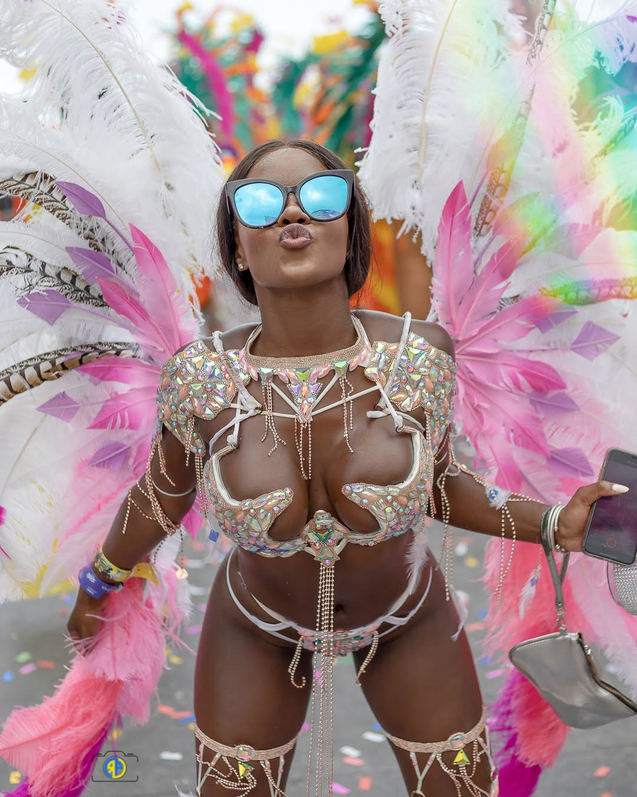 Global Carnivalist playing for Yuma Band in the Cloud 10 Section

For Carnival Tuesday, I chose to play mas with a well-known band called Yuma. Yuma elicited the talent of Rawle Permanand (@rawlepermanand) to design the costumes in the section I chose called cloud-10. The name possibly referred to the white base colour of my costume, complemented by iridescent pink and blue gems. In my opinion, it referred to the cloud 9 (but better) feeling I experienced when I wore the full outfit, complete with my modest feather backpack and my striking crown. For many people, who don’t quite understand the liberation and freedom associated with Carnival, walking out of your house (for about 5 plus miles thereafter in the parade) in what is essentially a decorated bikini can seem indecent and too risqué. However, it’s possible that these views have a lot to do with societal pressures, particularly those applied to women and their attire.

Sadly, psychological studies have shown that wearing fewer items of clothing can actually negatively impact the way women think about themselves and can even impact their presumed intelligence. In one study, entitled ‘the swimsuit becomes you’ (by Fredrickson, Roberts, Noll, Quinn and Twenge), researchers asked a group of female participants to complete a math test. While some of the female participants completed the exam in everyday attire, the other participants completed the exam wearing a swimming costume. The results revealed that, despite there being no difference in the intelligence between the two groups, the participants wearing the swimming costume performed significantly worse on the maths tests. The researchers concluded that this occurred because women often internalise the perceptions of others regarding the way they dress. It’s certainly true that in many Western cultures, women who choose to wear less clothing are deemed to be unintelligent, are sexualised and in some cases even vilified. These pressures can lead to self-objectification which produces body shame, “which is manifested in diminished mental performance”. Interestingly, the same negative effects were not experienced for the men tested in Fredrickson and colleagues’ experiment.

So, why did I feel powerful? I believe it has a lot to do with the environment. For the most part, in the Caribbean, the woman’s form is celebrated. I didn’t experience the lustful looks or hear the tsking of an older person when I had more skin on show than they would have liked. My body was decorated as if it were a prize to be celebrated and being among other women, who were all dressed similarly if not the same, can heighten that freeing feeling. That feeling of camaraderie was certainly felt by experienced masquerader Globey (@GlobalCarnivalist) who has travelled the world playing mas in 15 plus Carnivals. “I do feel a stronger sense of community when [playing mas]. Most times the other masqueraders in my section will look out for each other; fix a costume string here, tuck a panty line here, mention “hey you’re about to have a nip-slip”. It’s amazing how a Carnival costume can bring strangers together on the road.”

Some scientists would argue that the impassioned response that many masqueraders have to their head-to-toe sparkly costumes has an evolutionary component – a topic we discussed in the piece ‘Sciencing Beauty with Pat McGrath’. Evolutionary psychologists claim that our attraction to shiny things is linked to our ingrained need for survival. For example, in a study on children, infants aged 7-12 months old were found to put their mouths to glossy plates much more than to dull ones. Children had also been seen lapping shiny toys on the ground, the way an animal might drink from a puddle. Researchers have concluded that the connection between drinking and shiny design was an evolutionary artefact–a sign that “our crush on glossy fabrics is rooted in a primitive desire for water as a vital resource” (Coss, Ruff & Simms, 2010). 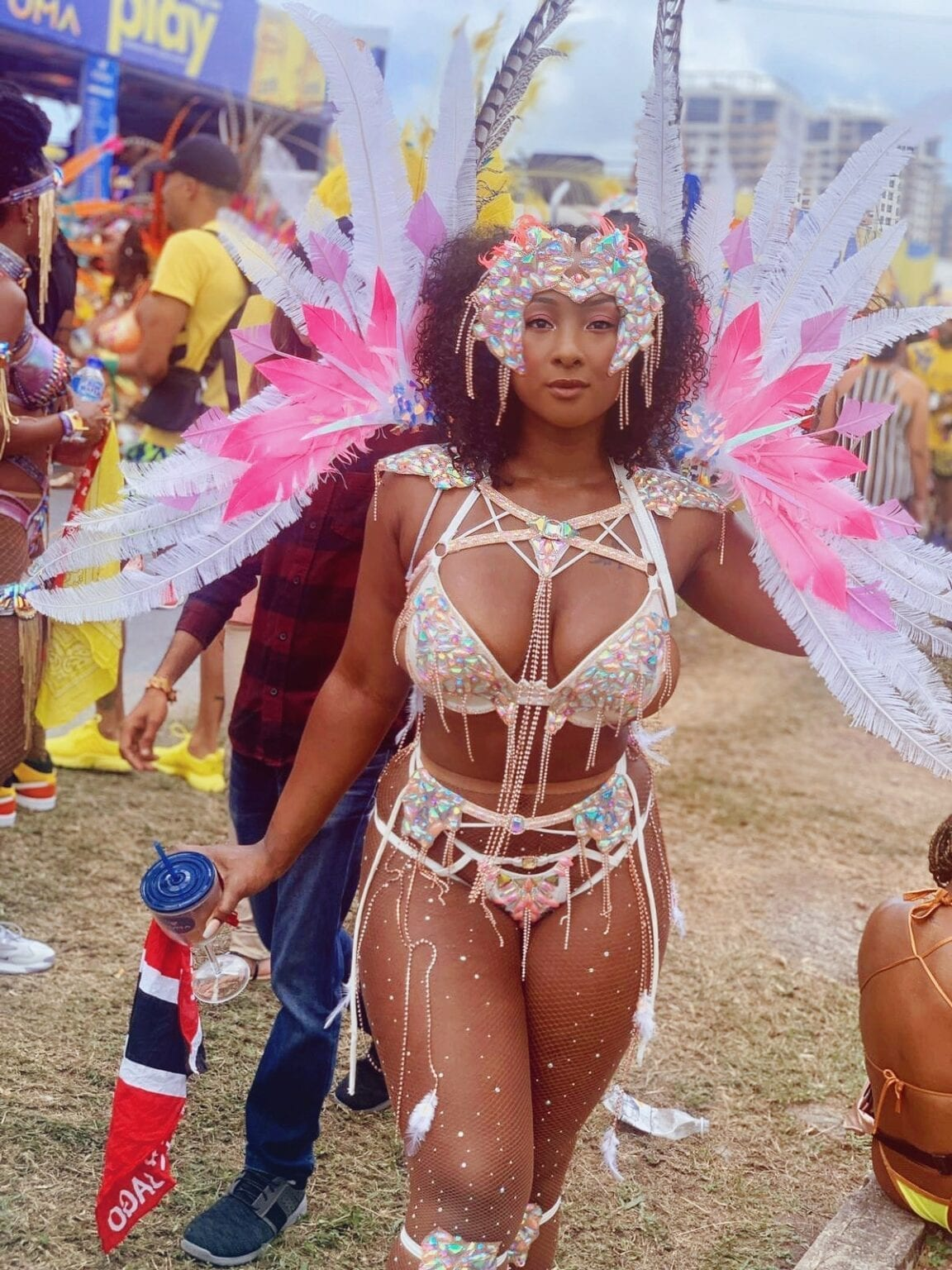 Me playing for Yuma Band in the Cloud 10 Section

Designing a costume is not as simple as throwing together some gems and hoping for the best. “The costumes are as diverse as the islands, colourful like our homes and innovative,” says Globey.  Not only are the costumes intricate, delicate and skilfully designed, they tell a story of a people who underwent unimaginable suffering to evolve free; free to celebrate their presence in a way that forces you to take notice.

The cultural significance of the Carnival costume was brought to light recently when Nigerian-American YouTuber Jackie Aina and Filipino-American YouTuber Patrick Star partnered with Uoma Beauty for a Carnival-Inspired Campaign. While the campaign claimed to be inspired by Nigeria’s Carnival celebration, the costumes featured were more reminiscent of Caribbean Carnivals like those held in Trinidad and dissimilar to the costumes worn at the Calabar or Caretta Carnivals in Nigeria. Naming a set of lashes in the collection “Trinidad” was not enough to halt the wave of disappointed tweets, some even coming from me. Many were upset at the fact that the campaign featured Non-Caribbeans donning Caribbean cultural attire, a move which can be interpreted as cultural appropriation. Others were disappointed at witnessing a routine that often happens in black communities, that being, when a community adorns a garment that’s unique to them they are at best misunderstood and at worst deemed derogatory. However, when that same garment is worn by a more visible person, detached from the community, they are celebrated. Thankfully, living up to her reputation as a champion for inclusivity, Aina listened to her followers and swiftly selected 4 Caribbean influencers to take part in Uoma’s campaign.

they let me pick 4 Caribbean influencers to participate in this campaign too. I’ll be giving $4,000 to each of AND and UOMA will also be boosting the look you create and adding you to their PR roster @QuintinMarcell @Naezrah @beautybybb_ and @korenarebecca I chose each of you ❤️ pic.twitter.com/xjyfMoyniA

Today I’m back in London. My feathers did not survive the 8-hour flight. My two-piece is missing a couple gems and I have a few scratches on my arms from careless attempts at dancing with fellow gemmed-up masquerades. However, I will never forget the freeing feeling wearing that outfit and having my body and all of its curves not simply accepted but championed.