All dressed up with nowhere to go. That’s been me at least once per week since lockdown started. On this blog, we’ve gone on and on about the power of comfort dressing. One of the (very) few good things this pandemic has given us is the ability to be comfortable daily. However, and I can’t stress this enough, giving up the glam life is not recommended.

Read more: Can loungewear make you better at your job?

Your clothes can help you experience different realities

Although we are limited by things like cultural norms and money, your clothes are still a powerful tool of self-expression. They can help you enhance certain aspects of your identity and even embrace traits you never knew existed in you. You should think of your clothes as a roadmap that helps you navigate these different realities but what you may not know is that your clothes can also help you escape your current reality.

We’re currently living through one of the most trying times of our lives. Around the globe, people have lost their jobs, their loved ones and any sense of normalcy due to COVID-19. You may be trying to simply get on with it but it’s important to develop strategies, no matter how small, to help you take your mind away from the doom, gloom and uncertainty and one way to do that is by playing dress-up.

Playing dress-up is a form of escapism

Playing dress-up is not just for kids. Doing a full face of make-up, styling your hair and wearing a sultry dress are all acts of playing dress-up because right now, the places we would normally showcase these looks are restricted. Engaging in these acts when you’re stuck at home can seem ridiculous but it can also constitute a powerful force that can positively affect your mental wellbeing.

Recently, a friend of mine remarked that she felt silly for wanting to buy a new pair of heels that caught her eye. I’ll tell you what I told her – there’s no need to completely suppress your shopping habits even though right now they may seem out of the ordinary. Studies have shown that “extraordinary” shopping experiences can be cathartic and can act as a break from daily habits that too often leave us feeling stressed and underwhelmed. We’ve all become increasingly aware of sustainability and the damaging effects of overconsumption. So, rather than regularly whipping out your credit card, you can mix in a few new pieces with those that haven’t seen the light of day since lockdown. The most important thing is that you make playing dress-up your new weekly ritual.

Wearing clothes that are a far cry from the hustle and bustle of everyday life act as a symbol for you leaving that life behind, even for a few hours. Studies have shown that people have fun by simply engaging in the act of wearing outlandish, sexy or even eccentric outfits which contributes to a feeling of escapism because “clothes in themselves carry this tensions release dimension”.

We’re living in highly politicized times when even wearing a mask (please wear a mask) is seen as a form of social commentary and frankly, it’s tiring. Ultimately, your clothes should be an area of your life that brings joy. While comfort is important, you should attempt to get ‘all dressed up’ at least once in a while to embrace the power of your wardrobe to help you escape the bleaknesses of your day-to-day life; even if you have nowhere to go and even if it’s just for a little while.

In the comments, let me know what pieces you’ve missed wearing this year.

by Shakaila Forbes-Bell
Keep Reading
With news breaking of President Obama launching an enquiry into the possible hacking of the recent US election many have wondered whether the US has been robbed of its first female presidential nominee. As it stands, after a long, hard fought and controversial race Hillary Clinton is no longer in the running to become the next leader of the free world and yet the ground she has broken is undeniable.

For centuries, a glass ceiling has shrouded women’s career goals as we battle pay-gaps, sexual harassment and plain old disrespect in the workplace. Putting erroneous emails aside, with her historical presidential run, Hillary Clinton wielded young women worldwide with sledge hammers ready to break through these ceilings and take charge in uncharted territories.

Unlike their male counterparts, women in politics often receive higher levels of scrutiny from the press, most of it concerning their physical appearance and wardrobe. While some lament the fact that such women receive more attention for their looks rather than their policies, it is often the case that female politicians use their clothes to their advantage; to make a statement, to define their character or to draw attention to themselves in a male dominated arena and there is no shame in playing the fashion game. Just recently, Samantha Cameron the ever stylish wife of former British Prime Minister David Cameron launched her fashion label Cefinn making it clear that politics and fashion are not mutually exclusive forces.
​

One clothing staple that any woman in the political sphere has in her wardrobe is a pantsuit. If you were to play a quick-fire word association game with the cue ‘Hillary Clinton’ we can bet you, your second answer would be ‘pantsuits’ (your first would be ‘emails’ but no one on god’s green earth wants to hear about those anymore). More recently, we have seen Clinton forego the standard longline blazers in favour of matching sets featuring structured jackets with Mandarin collars. Whether you’re a fan of this look or not one thing you can’t disagree on is the fact that her tailoring is always impeccable and when it comes to first impressions Psychology suggests that tailoring plays a very important role.

In 2011, psychologist Karen Pine conducted a study on men’s business clothing. Results found that a man wearing a bespoke Made-To-Measure suit compared to a man wearing one Off-The-Rack is deemed to have more confidence and to be more successful. Few studies have been conducted for women’s tailoring but the same knowledge applies.  Whilst it is true that fashion choices should not be placed up against matters such as immigration and national health, the public will be more inclined to listen to what you have to say if you display yourself as someone worth listening to.
​ 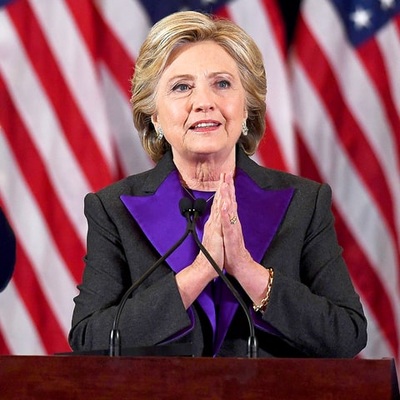 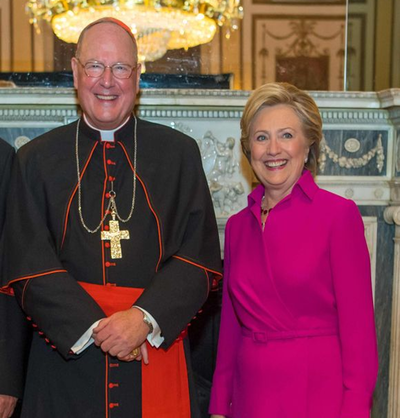 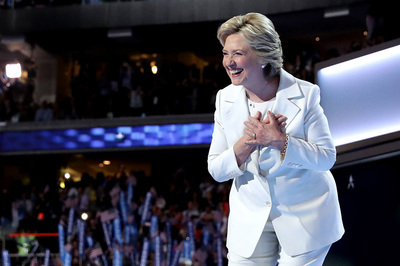 Every election season we see subtle instances of presidential candidates using colour to their advantage and in her war against the so-called ‘basket of deplorables’ Hillary armed herself with every pigment imaginable. Forgoing prints in favour of solid and vibrant hues, Clinton stood out for all the right reasons. Throughout her run, Hillary was plagued with criticisms concerning her standoffishness and cold demeanour. However, as the race ran on. the colouring of Hillary’s outfits became brighter conveying a softer and more human side to her nature.

At the third and final presidential debate, she stepped out in a signature Ralph Lauren pantsuit in a dazzling shade of white. Research into colours and emotions suggests that bright colours such as white are “more pleasant, less arousing and less dominance-inducing   than  less bright  colours  such as  dark greys and blacks” (Patricia  Valdez  & Albert  Mehrabian, 1994).

The first time she wore a dress during the election, Hillary again turned to Ralph Lauren for a simple yet immaculate hot pink gown. Traditionally pink is associated with softness, delicacy and infancy and is also used to denote the female gender. However, a study conducted by Veronika Koller (2008) found that many now associate the colour pink with independence and postfeminist femininity – a strong statement considering that Hillary’s run focused on appealing to minorities, particularly women of colour as well as the LGBTQ community.

​And this was not the last-time Hillary used colour in an impactful way. When she made her concession speech she wore purple. The significance of the colour for the suffragette movement coupled with the impact of her being the first female presidential nominee was not lost on many.
​

When the news hit that Theresa May was going to become Britain’s second female prime minister the report was overshadowed by her shoes. She donned a pair of leopard print kitten heels and the media had a field day. May, who has never been shy about her fondness for footwear has since been branded a ‘feminist in kitten heels’ but many can’t seem to jump on board with the 3-and-a-half-inch style. Even though Vogue has hailed kitten heels and boyfriend jeans as the ultimate cool girl outfit, amongst the masses, kitten heels are an acquired taste to say the least but women in politics just can’t seem to get enough of them.

​Michelle Obama, Hillary Clinton and Condoleezza Rice all share May’s enthusiasm for kitten heels and Psychologically speaking, the low-heeled shoe does seem to strike a perfect balance. They’re low enough to provide a level of comfort necessary to keep up with the fast-paced world of politics yet high enough to attract positive attention and admiration. Recent Psychological research has shown that even when their feet are not visible women wearing heels are deemed to be more elegant than women wearing flat shoes (Guéguen, Stefan, & Renault, Fash (2016).

During World War II the epaulettes that graced the shoulders of soldiers manoeuvred their way into the fashion industry as women donned shoulder pads as symbol of solidarity with the brave fighters abroad as they contributed to the war effort at home. Although post-war women’s fashion saw less uniformity and more cinched waists, shoulder pads made a huge come back in the 80s on the heels of the second wave of the feminist movement. In the 80s-movie classic Working Girl, Melanie Griffith’s character dons larger than life shoulder pads to legitimise her new position as a respected business woman and thus the era of power dressing was born with designers such as Alexander McQueen and Dolce & Gabanna showcasing the style on the runway. In the 80s and during its revival in the early 21st century, shoulder pads were the clothing equivalent to ideology of ‘leaning in’ – taking charge and embodying power in male dominated industries.

With shoulder pads its very much a case of ‘if you can’t beat them – look like them’. Broad shoulders are typically associated with males, with studies showing that men with broad shoulders are not only perceived to be more masculine but they also possess higher testosterone levels (Kasperk et al, 1997). So, it’s no surprise that shoulder pads were a favourite of Margret Thatcher – Britain’s first female prime minister. Wearing shoulder pads ensured that Thatcher took up more space in any room she entered. The added association of the style with masculinity ensured that her gender did not lessen the amount of respect she commanded from those she encountered.  During the height of her career Thatcher’s business attire consisted almost exclusively of shoulder padded tailored jackets in understated patterns or bold and solid colours which only enhanced the severity of her look and subsequently solidified her position as ‘The Iron Lady’.
​
According to Donald Trump, this hacking scandal is without merit but who knows, come 2017 we may see a white pantsuit instead of a white combover in the oval office. One can only dream.